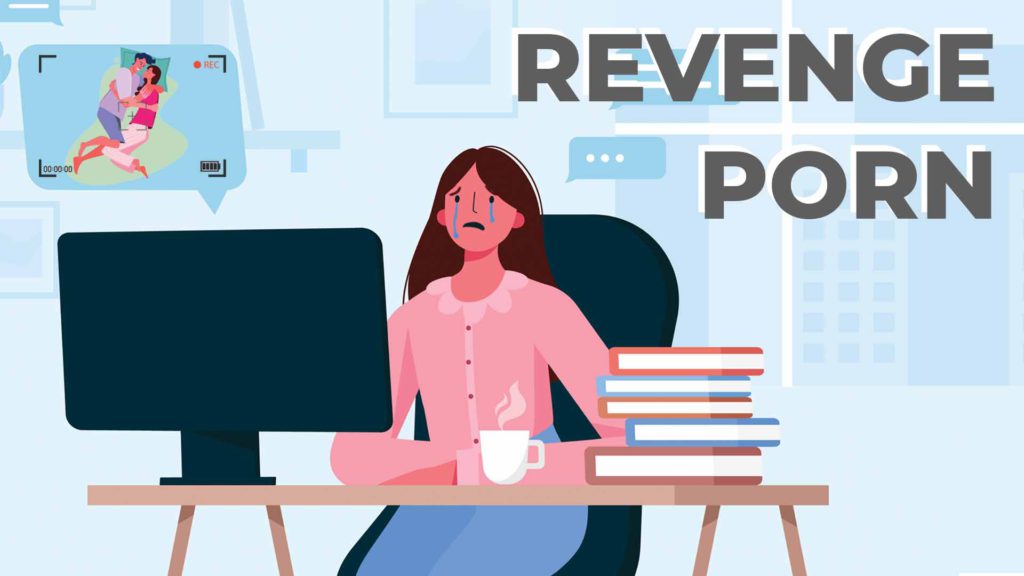 In 2019, a freshman Democrat from the state of California turned in her resignation from Congress.

The reason behind this you ask?

Earlier that month there were nudes photos of her that were leaked to the press, without her knowledge.

It was later alleged that it was the congresswoman’s separated husband, who had committed this crime.

When this story made the news, it was one of the first times many Americans heard this phrase.

If we were to just have a look at such cases through the last decade, you would be shocked and appalled at how common this crime is. Not just in America, but all over the globe

What is Revenge Pornography?

Frequently this material was originally taken and shared consensually between intimate partners, but after a break-up, one partner posts it publicly to humiliate their ex.

Currently, there is a growing movement to recognize the seriousness of this behavior which can disrupt the lives of victims and make it difficult for them to hold jobs or maintain relationships, leading in some cases to depression and suicide.

Lately, this has become a major problem not only amongst the younger generation but amongst people of all ages.

Experts believe the blame here is on technology, along with a lack of awareness.

With most mobile phones having decent quality cameras and everyone having access to the internet, sharing media has never been easier.

Even though this problem has been around, what’s different now is that people openly report cases.

In November 2019, Congresswoman Katie Hill resigned from Congress, after an incident that involved the circulation of her nude images without her knowledge and consent.

Hill then went on to file a lawsuit against her husband, who she believed leaked the aforementioned images of her while they were in the middle of getting a divorce.

Alongside her husband, the former congresswoman also sued the owners of The Daily Mail and the right-wing blog RedState.

In late December of 2020, more than 1,400 explicit snaps of the mistress of the king of Thailand were forwarded to the detractors of the royal family.

The leak of the “very explicit” photos of Sineenat Wongvajirapakdi, also known as Koi, is thought to be connected to a bitter rivalry between the King’s mistress and his wife.

These pictures of Koi provocative posing for the camera, came right after she joined the Royal harem late last year. Crimes like these happen to everyone. Common man or royalty.

At the beginning of 2021, The Telegraph published a news story.

It was of a victim who came forward devastated that her abuser faced no repercussions for the crimes he committed.

This was a result of the popular social media platform Snapchat failing to provide evidence of any wrongdoing.

Snapchat is a social media platform, designed to automatically delete material, once it is opened.

The problem here is that this also includes potentially incriminating images and videos that can be used in court.

So, when the victim filed a complaint against her abuser, by the time Snapchat responded to her forces, it was already too late and all the evidence has already vanished.

Another incident in early May of 2020, a woman in India lodged a complaint of obscene images of her being circulated without her consent.

After registering the case under the IT act, when the police started their investigation, it was revealed that more than 500 people were involved in this crime ring of circulating pornographic images and videos in North India.

The main culprit in this particular situation was the ex-boyfriend of the victim. He was later tracked down and arrested in West Bengal.

It Does Not Only Affect Women

Men are victims of such crimes too.

In 2020 a woman was jailed after she was found posing as a man on the dating app Grindr. Using explicit images of a man without his consent.

The judge on the case revealed that Yannick Glaudin, the woman in question was driven by revenge to use the pictures of the man, who had long broken contact with her.

She sent intimate photos of the user to his family, friends, and colleagues, as well as spreading false rumours about his then-boyfriend.

In our society, there is a lot of pressure on both men and women when it comes to sexual behaviour.

No matter how progressive your surroundings might be, you are still judged in this aspect of life.

This is even more true for women.

Constantly worrying about the number of people who have seen it. Even if 5 people saw the picture, it doesn’t feel that way. When you’re on the bus getting to work, it feels as though everyone on the bus has seen the image.

It leaves the victim feeling vulnerable and helpless at all times. Worse yet, it does harm to whoever watches that as well.

But, where is the shame when it comes to the person who committed the crime?

Why would someone commit a heinous crime like this?

Anger and hatred are often key behind such crimes.

It is often when a person feels betrayed and hurt, they try their hardest to make the person who hurt them feel the same kind of pain and sadness.

Can You Spot Someone Who Could Do This?

But, other experts believe this to not be true.

While sharing intimate images, if you feel coerced, pressured, or even slightly uncomfortable, that should be enough to set off alarm bells.

From victim blaming to stigmatizing acts, we have a lot of things to blame for this problem.

Don’t you think it’s time to end this vicious cycle?

And there is no set global standard of dealing with these crimes.

However, recently more and more countries have introduced new laws and are moving to protect the victims.

The government of Canada passed the Bill C-13 in 2015. Popularly known as the cyberbullying act.

Germany is one of the few countries in the world that has implemented very strict laws on privacy.

Section 33 of the Criminal Justice and Courts Act passed in 2015, makes it a criminal offense to disclose private and sexual photographs and films without the consent of the individual depicted and with the intent to cause distress.

If proven guilty, there is a maximum sentence of two years of imprisonment.

The Japanese government passed the Prevention of Damage by Provision of Private Sexual Image Records Act in 2014.

It carries a maximum sentence of three years in prison or a fine of 500,000 yen.

This was a revolutionary act.

Different states in the US have different rules and laws implemented.

For example, in Arizona, The Unlawful Distribution of Private Images, 2016 through amending Section 13‑1425 of the Arizona Revised Statutes makes the distribution of private images of another person without their consent unlawful.

In Illinois, Section 11-23.5 of The Illinois Criminal Code of 2012 states that non-consensual distribution of sexual images is a class 4 felony. Other states in the United States Of America have passed similar laws too.

Like the US, there is no national law in Australia.

New South Wales is in the process of proposing legislation.

News reports say it has become the “new normal”.

But, this is no way to move into the new year. As responsible citizens of this world, it is our duty to put an end to heinous crimes like these.

A culture that sexualizes and objectifies the female body to no limit.

To change a culture like this, strong willpower, patience and the will to fight should be present. In conditions like these, even the smallest change matters.

Only then will the frequency of such crimes will eventually decrease and hopefully stop.

When you start to really like something, have you felt the never-ending need to consume it in large amounts? It could be